GAC’s 690-square kilometre mining concession is located between the towns of Sangaredi and Boké, in the northwest of the country. Bauxite deposits are found at or near the surface.

The area to be developed before 2040 contains almost 400 million tonnes of bauxite mineral resources.

Drill operators drill 140-millimetre blast holes in line with a predetermined plan. The blast holes are loaded with explosives and then detonated, which breaks the rock.

The ore is then loaded onto trucks by excavators. Production truck drivers make the trip to empty their bauxite ore loads into a crusher, which crushes the bauxite to less than 100 millimetres, which allows easier handling and transport.

The crushed bauxite is then fed via a conveyor at a rate of 2,500 tonnes an hour to a rail-mounted stacker, which loads the ore into one of two stockpiles (each with a 165,000-tonne capacity) located parallel to the railway track, in preparation for loading into rail wagons. 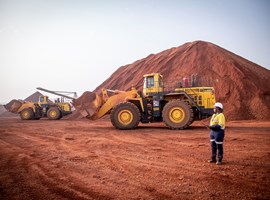