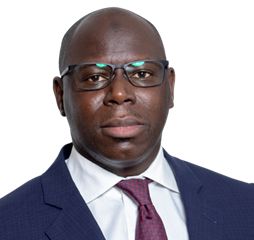 Malick N’Diaye is Director General of GAC and is responsible for Human Capital, Government Relations and Community Relations. Mr. N’Diaye joined GAC in 2014 as Chief Financial Officer and was promoted to Deputy General Manager and Head of Community Relations in January 2019. He assumed his current position in 2021.

Mr. N’Diaye has two decades’ experience in finance, accounting, auditing and consulting as well as treasury and fiscal management in the Republic of Guinea, the United Kingdom and the Democratic Republic of the Congo. He has held various senior positions with Ernst & Young and has also worked for two major mining companies, Rio Tinto and Xstrata.

After obtaining a bachelor’s degree in Political Science and International Relations from the School of Advanced International and Political Studies in France, Mr. N’Diaye obtained a master’s degree in Finance & Capital Markets from the INSEEC business School of Business & Economics in Paris, and has taken a variety of specialized short-term management courses at INSEAD, one of the world’s leading and largest graduate business schools, as well as at the Niagara Institute, in Canada.

Mr. N’Diaye is Vice-Chair of the Board of Guinea’s Supplier and Partnership Marketplace (BSTP), and a Director on the Board of the Caisse Nationale de Sécurité Sociale. He is a former Chairman of the Guinean Chamber of Mines.