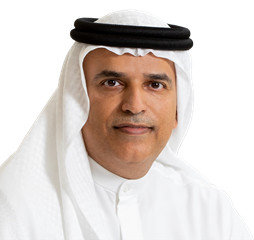 Abdulnasser Bin Kalban is Board Member of GAC and Chief Executive Officer of EGA.

Prior to his appointment as Chief Executive Officer in 2020, Mr. Bin Kalban had served as an Alternate Board Member of EGA since May 2017.

Mr. Bin Kalban joined DUBAL in 1996 and worked in both Major Projects and the Power and Desalination Department. (DUBAL merged with EMAL to form EGA in 2014).

In 2014, Mr Kalban left his position as General Manager of Power and Desalination at EGA to become CEO of Dubal Holding LLC, EGA’s 50 per cent shareholder.

Mr. Kalban has a degree in Electrical Engineering from Western Michigan University in the United States, and has completed Strategic Management and Leadership Courses at Insead Business School, France and Harvard Business School.